The Road to Hell

Ghosts do not exist, of course, but if they did the road from Obrovac to Sveti Rok in Croatia would pullulate with the outraged spirits of dead young men. These days the A1 motorway plunges underneath the Velebit Mountains through a five kilometre tunnel above which Serbian separatists fighting for an independent Krajina, 'ethnically cleansed' tens of thousands of Croats during the war of Croatian Independence. I have driven through this tunnel many times and often wanted to leave the motorway and explore the surrounding hills but have never previously found the time to do so.

I finally had the opportunity last week to drive the brilliantly engineered but now redundant road over the pass by Mount Alan. The landscape is ravishingly lovely. The brilliant white limestone has been sculpted by aeons of rainfall into spectacular, rounded forms that seem almost organic. On the seaward side of the Velebit range Juniper and Hornbeam have been topiarised by the incessant wind into rock-hugging blankets that obscure all sharp edges and accentuate the spine-tingling sense that the entire mountain is alive. 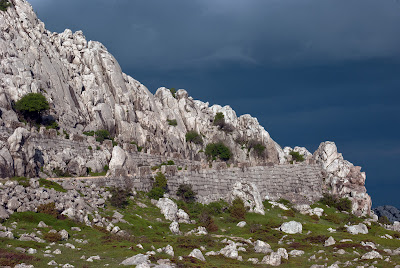 I drove the road from south to north and immediately encountered signs indicating that the land is still littered with landmines, fifteen years after the end of the fighting in this part of Croatia. 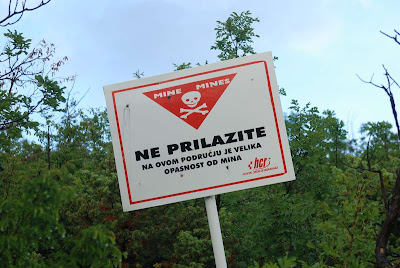 Further along the road frequent memorials appeared, dedicated to the men who died here trying to kill similar young men on the other side. It is really impossible for an outsider like me to understand what drove the politicians who sent so many ignorant, innocent soldiers and civilians to their deaths, in the name of an independent Croatia or Krajina. Nationalism is surely a deadlier virus than any of the other plagues to which our biology make us vulnerable. It has proven over the centuries unbelievably easy for charismatic leaders to unite a people against a manufactured foe of 'others', in pursuit of the leader's ambitions. Here is one poignant shrine, nearly at the highest point on the road. 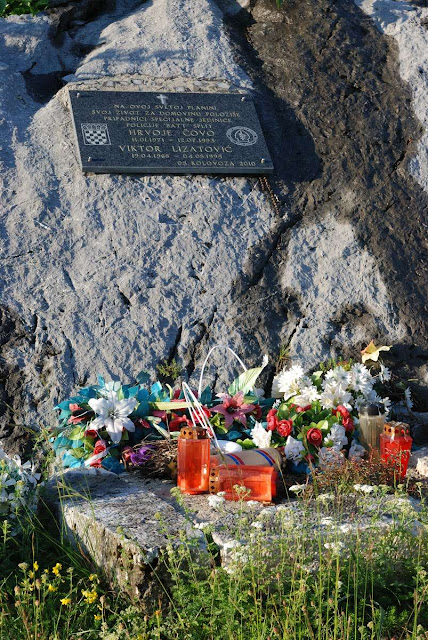 I saw only one other vehicle on the road, parked, with two men standing beside it gazing out at the view. They smiled at me as I passed. All the dwellings, bar one, had been destroyed. 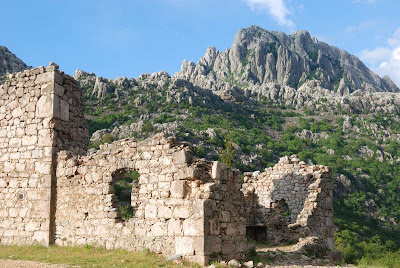 Driving the few miles of this road took me a couple of hours. The juxtaposition of astonishing natural beauty and the sense that evil had been done here was mind-bending (for the avoidance of doubt, I don't intend the word 'sense' to be understood in a supernatural sense, but I've never been anywhere else where the intuition that truly awful acts had been committed was so tangible).

Have you ever wondered what it's all about? Have you ever stared numbly out at the world during your daily commute and thought 'there must be more to life than this'? Have you ever felt you were meant for something more? If so, you have probably bought Rick Warren's book 'The Purpose Driven Life' or considered attending the Alpha Course. These wildly successful phenomena are examples of what I call alphatuosity: flim-flam masquerading as insight.

Alphatuous ideas lock on to various evolved modules in the human mind and produce an illusion of insight. They take advantage of the fact that common sense is both a wonderfully reliable guide to the behaviour of things on human scales and speeds and also woefully misleading on smaller or grander stages. They can be nonsensical, absurd and funny but also dangerous and I believe that they ought to be hunted to extinction.

The scruffy mongrel Toto in the Wizard of Oz pulled back the curtain hiding a charlatan who had been posing as a powerful magician, shocking Dorothy and instantly breaking the spell. Unlike the Wizard of Oz, who claimed to be 'a very good man...just a very bad wizard', alphatuists are often good wizards but very bad men (they are usually men).

My aim in this blog is to play the role of Toto, exposing the tricks used by the unholy alliance of charlatans and fools behind the contemporary deluge of alphatuosity. I shall also be exploring the science of belief and trying to discover why minds are so vulnerable to it. I shall show that there are satisfying answers to the deep questions we all ask ourselves, answers that follow from evidence, not revelation, tradition or authority.

torquatus
History does not record why my sperm won the first and only race of its life but, damn, it was a doozy. Most of my life is spent around plants. I go looking for interesting ones in the wild, grow them, study them and write about them, on my blog A Tangled Bank. I also have a long-standing interest in the phenomena of belief, both as scientific curiosities and, more recently, in my capacity as the father of two young children who are starting to encounter some dangerous beliefs. You can read about my take on the subject in Alphatuosity.