Healthy, Hand Made and Solidary 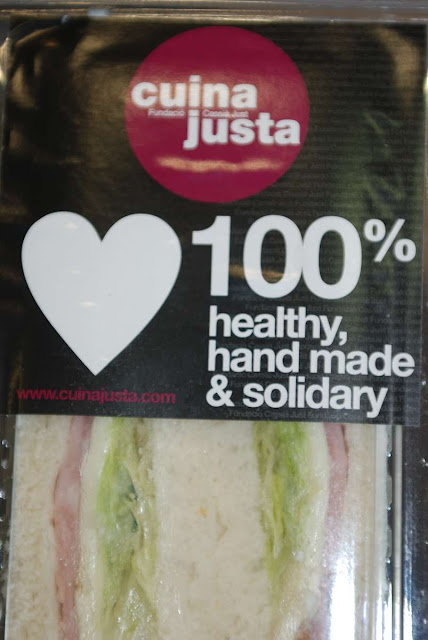 I bought this sandwich, at La Cervecería in Barcelona Airport’s Terminal C. This building is dedicated, if that’s the right word, exclusively to processing Easyjet’s customers. Spending an hour in an abattoir would probably be less pleasant still, but it would at least be salutary. There is nothing to be gained in an hour spent in Terminal C at Barcelona Airport, other than a more realistically despondent appraisal of the prognosis for Homo sapiens than the one you subscribed to prior to entering the temple.

Of course I did not buy the sandwich with the intention of eating it. Notionally, it’s a ham and cheese sandwich but its ingredients included no fewer than sixteen – yes sixteen – E-numbers. The first ingredient listed, ‘pan blanco molde’ was at least accurate, assuming the words were written in GSCE-A* English. I’d been under the naïve misapprehension that E-numbers had been banned under the Geneva Convention (or do I mean the Treaty of Rome?) but, if so, La Cervecería is either oblivious to the legal situation vis-à-vis slow-acting poisons or indifferent.

What caught my eye, as I shuffled silently forward in a queue of bovine conspecifics, was the intriguing headline claim on the sandwich box: ‘100% healthy, hand made & solidary’. Of these three claims, the first is obviously a lie. Nothing with so many flavour-enhancers, fungal-inhibitors and sogginess-suckers incorporated into its being could be anything other than seriously injurious to your health if consumed. The second claim is plausible, though hardly a virtue. Given that I paid only two Euros for the sandwich, the labour component cannot have amounted to more than a Euro cent or so, implying that the unfortunate assembler probably cannot afford soap. The third claim is fascinating. What could it mean? That the sandwich is all alone and in desperate need of a friend? That, when not for sale at Barcelona Airport, it is on the picket lines with the dock-workers of Vladivostok? That, on account of the anti-deliquescent (E-666), it has not yet decomposed into its natural liquid state?

‘Cuina Justa’, the brand name, means ‘Fair Cuisine’ in Catalan, according to Google Translate. I think that must be a sophisticated, multi-layered joke but I don’t get. Would you eat this thing? Would you feed it to your children? Or your dog? If so, can I recommend you slip a prophylactic dose of Ritalin between the slices of pan blanco molde?

Before I leave the subject of this extraordinary sandwich alone, here is a gratuitously offensive image of the results of a dissection I conducted. 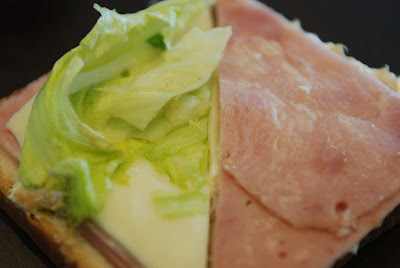 As a result of my investigations into La Cervecería’s sandwiches, I boarded my flight simultaneously hungry and somehow lacking an appetite. I felt that a packet of nuts and a plastic cup of red wine would probably fill this paradox-shaped hole. First we had to get through the rigmarole of safety demonstration, take-off, ascent to cruising altitude and rush to the toilets of returning stag party members. Allowing for the announcement that the toilets are no longer in service, rush to toilets of returning stag party members, descent and landing, this left about 20 minutes during which the cabin crew could sell us stuff. My nuts didn’t so much fill the hole as disappear over its event horizon but there was no opportunity to buy more (at about ten cents per nut) because the cheeky chappy, who’d earlier told us he was on board primarily for our safety, was busy flogging scratch cards to the returning stag party members, whose ability to calculate odds was evidently impaired.

Out of curiosity, who believes that the cabin crew on an Easyjet flight are primarily there for your safety? Even the plumpest beneficiary of the company’s positive discrimination policy could hardly provide sufficient cushioning between you and certain death in the event of a genuine emergency. In a similar vein, I cannot help wondering whether seat belts on aircraft have ever saved lives. Has anyone ever gone on daytime TV and tearfully thanked the late cabin crew for instructing her in seat belt fastening techniques prior to the catastrophic explosion that killed everyone else on board? In fairness, not everyone knows how to fasten a seat belt. I was once on a flight between Quito and Buenos Aires when the woman sitting next to me picked up the two ends of her seat belt and contemplated them in the manner of the ape eyeing a thighbone in Arthur C. Clarke’s ‘2001. A Space Odyssey.’ She is hardly representative of the travelling public, however, and one wonders whether the time has not come to dispense with this pointless and embarrassing routine. Do the airlines’ lawyers really imagine that the inconsolable relatives of plane crash victims are going to sue (successfully) on the grounds that their incinerated loved-ones weren’t told how to fasten their seat belts?

Have you ever wondered what it's all about? Have you ever stared numbly out at the world during your daily commute and thought 'there must be more to life than this'? Have you ever felt you were meant for something more? If so, you have probably bought Rick Warren's book 'The Purpose Driven Life' or considered attending the Alpha Course. These wildly successful phenomena are examples of what I call alphatuosity: flim-flam masquerading as insight.

Alphatuous ideas lock on to various evolved modules in the human mind and produce an illusion of insight. They take advantage of the fact that common sense is both a wonderfully reliable guide to the behaviour of things on human scales and speeds and also woefully misleading on smaller or grander stages. They can be nonsensical, absurd and funny but also dangerous and I believe that they ought to be hunted to extinction.

The scruffy mongrel Toto in the Wizard of Oz pulled back the curtain hiding a charlatan who had been posing as a powerful magician, shocking Dorothy and instantly breaking the spell. Unlike the Wizard of Oz, who claimed to be 'a very good man...just a very bad wizard', alphatuists are often good wizards but very bad men (they are usually men).

My aim in this blog is to play the role of Toto, exposing the tricks used by the unholy alliance of charlatans and fools behind the contemporary deluge of alphatuosity. I shall also be exploring the science of belief and trying to discover why minds are so vulnerable to it. I shall show that there are satisfying answers to the deep questions we all ask ourselves, answers that follow from evidence, not revelation, tradition or authority.

torquatus
History does not record why my sperm won the first and only race of its life but, damn, it was a doozy. Most of my life is spent around plants. I go looking for interesting ones in the wild, grow them, study them and write about them, on my blog A Tangled Bank. I also have a long-standing interest in the phenomena of belief, both as scientific curiosities and, more recently, in my capacity as the father of two young children who are starting to encounter some dangerous beliefs. You can read about my take on the subject in Alphatuosity.